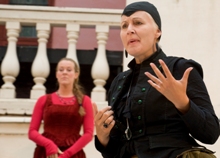 Outdoor summer opera is an exciting thing to do since the Swedish summers are not really reliable!
A few summers ago I was singing Mrs Herring in Britten´s opera Albert Herring at Läckö Slott when a storm really hit the place. The poor audience could hardly hear a word that was sung because of the wind and in the middle of my aria the roof cover broke. Well, the show must go on, I thought and kept singing and singing until I realized that even the orchestra had left the building…
Summer of 2008 was however a nice and warm summer and I had a lovely time at Läckö singing the part of Ebba Brahe in the opera ”Magnus Gabriel” by Daniel Börtz.
Magnus Gabriel and his relatives lived in Läckö Slott in the 16th century so it was fascinating to make the performance in it´s right historical environment!